Ok…I don’t know about you, but I’m totally confused by the methods that people use to gain awareness for various causes. I’m sure that most of you are aware of the different status changes that women are doing on Facebook in honor of Breast Cancer Awareness.  In the past, women have changed their statuses to a color with no other information.  What did the color mean?  Well, it was the color of their bras.  There was another wave of status changes dealing with women’s pocketbooks, and now, involving an amount of time one will spend abroad in a foreign company.  The amount of time and place correlate with the individual’s birthday (day and month).  I’ve sat quietly by this past year as all this has gone on, but today, after receiving my 4th note about participating in another “Facebook cryptic status change for breast cancer awareness” and making sure that we don’t tell men about it, I have a few things to say.

The first things is, what in world does changing our Facebook statuses to the colors of our bras or telling people that we are “spending 26 months in France” have to do with breast cancer awareness?  And why are men not supposed to know what we are doing?  Aren’t men effected by breast cancer too?  When I think of it, men kind of have a double whammy!  Not only can their wives get breast cancer, but so can they!  So it confuses me why we aren’t involving men in any type of awareness campaign.

I’ve tried to think of the reasoning behind these cryptic status changes.  Maybe people are thinking that people see all of these messages and ask what it is all about. After an unspecified amount of time it comes out that this all has to do with raising awareness for breast cancer.   Maybe that works, I don’t know.

What good does sharing these silly things do to help raise awareness?  What does this do to help people like Jenny?  And quite frankly, don’t you think we have a LOT of awareness?  I know that our family and friends are quite aware that breast cancer exists. What I think we need to be focusing on is breast cancer prevention, early detection, and finding a cure.

“I just finished doing my monthly self-breast exam!  Have you done one this month?”

“Have you scheduled your yearly mammogram?”

“I’m increasing my intake of antioxidants as they have been reported to help reduce cancer risk!”

or what my husband said he’d be happy for me to write on Facebook:

“I just finished helping my husband do his monthly testicular exam!” (Seriously, that man is too much!)

Why aren’t we sharing information like that?  Is it too embarrassing? Is it taboo?  Could you imagine how powerful those type of status changes could be?  If it caused even 1 person to do a self-exam and find that lump in an earlier stage, I would count that as a positive breast cancer awareness & prevention campaign. 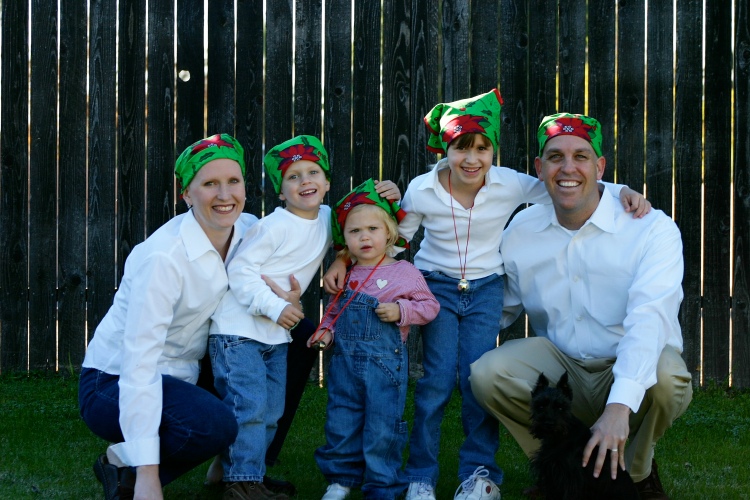 So instead of telling people that I’m going to spend 26 months in France, I’m going to tell you a bit about my sister.  She was diagnosed with breast cancer a month shy of her 31st birthday.  She found a lump while doing her monthly self breast exam! I just wrote a guest post on her blog about what I remember from walking that road with her.  You can read that post here!  She underwent a bilateral mastectomy and 8 rounds of chemotherapy.  We are so blessed that she has been in remission for over 6 years.

She has embarked on a new journey!  She has over 1300, yes 1300, items on her “life list” that she would like to conquer!  Some of them are simple like making homemade jam and some of them require a lot more preparation, like running a marathon, climbing Machu Pichu, and one of my personal favorites, Dancing with Ellen on her show!  You can check out her full list here.  She started blogging her journey this past year and hasn’t looked back since.

So in honor of my sister and in memory of people like Gina, our friend Brian’s sister, who lost her battle with cancer just a few short months ago, or my friend Molly’s mom, who lost her battle several years ago, I am going to be INTENTIONAL about doing something that truly can make a difference.  I don’t think any different about my friends who participate in the “Facebook status changes”, but now you know why I don’t!

So I encourage you to be bold in telling others the steps they can take to detect breast cancer early.  I also encourage you to participate in a race, a fundraiser,  or doing something on a local level, like helping an individual out who is going through treatment right now!  You could take the family a meal or even give a gift card to a local restaurant or grocery store.  I know that so many friends and strangers stepped up and helped us when my sister was going through treatment years ago.

Well…that’s it and in the words of Forrest Gump “That’s all I have to say about that!”  Thanks for listening!

Make it a great one!