I often hear from family and friends that they love to hear about the funny things that Skylar says and does.  Like so many children on the autism spectrum, Skylar says whatever she is thinking.  We often find it very refreshing that Skylar has no filter and just shares whatever is on her mind.  However, there have been times when her lack of filter and honest demands have left me red-faced and absolutely speechless.

So I have decided to make every Friday a “No Filter Friday”. A time for us to share those funny stories or quotes that keep us in stitches.

For the the premiere of “No Filter Friday” I’d like to tell you the story that we affectionately refer to as “Diane’s Rehearsal Dinner & the Grilled Cheese Sandwich”. 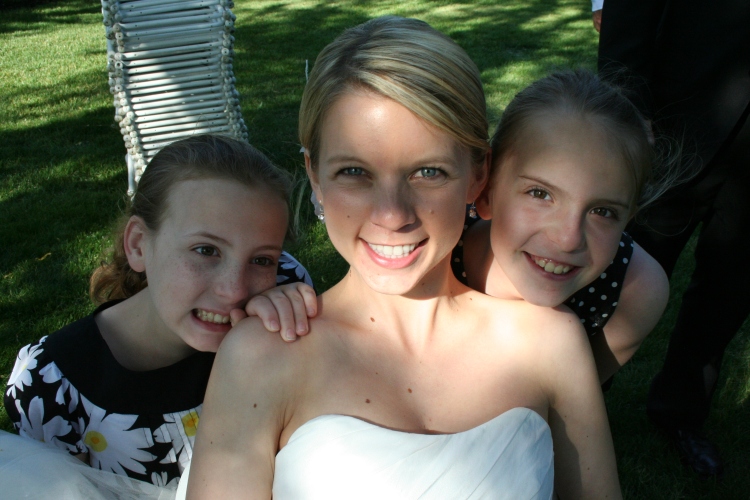 This past May, the 4 of us traveled to central California for the wedding of Chris’ sister, Diane.  The girls were absolutely thrilled to attend the wedding as they think Diane is “Uber Cool”.  Like most weddings, all 4 of us attended the traditional rehearsal and dinner the night before.  Diane and Adam held their rehearsal on the property of Adam’s aunt.  It was absolutely beautiful and we were thrilled that it was outside so that the girls could run around and play.  In fact shortly after we arrived, the girls disappeared with a group of children to play on the backyard swing set.

As the rehearsal ended and we were getting settled for dinner, Diane announced that Adam’s aunt had prepared a delicious lasagna, bread & salad.  My first thought was “I’m not sure if Skylar will eat this, but I’m hoping she doesn’t throw a fit”.  Italian is Hailey’s favorite, so we knew that we were safe there.  As we got the girls settled at the kids’ table, Adam’s aunt walked up to me and said “here is the grilled cheese for your daughter”.  I was confused! The rest of the conversation went as follows:

Aunt: This is for your daughter.  Isn’t she yours? (pointing at Skylar)

Aunt:  Well, she told me that she can not eat lasagna, but that she could eat a grilled cheese sandwich.

This wonderful woman actually stopped what she was doing and made Skylar a grilled cheese.

I immediately turned red & then turned to Skylar.  I told her that I couldn’t believe that she had asked this lady that she didn’t know for a grilled cheese.  She responded:  “What?! I don’t like lasagna & I really wanted a grilled cheese.”

You had to see the expression on her face.  It was of total innocence.  She truly did not see anything wrong with asking for what she wanted.  At this point several of the people that we were sitting with asked what happened.  As we told the story to them, they immediately started laughing. Scottie, one of the guys at our table said “Oh my gosh! That is AWESOME! I totally love her!”

I have to agree with Scottie!  Only Skylar could ask for exactly what she wanted, get away with it, & give us a story that will keep us laughing for years to come.

I hope you’ve enjoyed this first installment of “No Filter Friday”.  You can be sure that there are many more to come!

Have a GREAT weekend!

3 thoughts on “No Filter Friday”